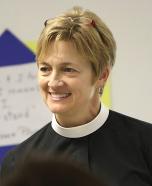 The Rev. Dr. Ann Willms was born and baptized in St. Paul, Minnesota. Her grandparents were especially important to her faith formation as an Episcopalian. Ann attended Brown University as an undergraduate and received an A.B. in Human Biology. She received her M.D. from Jefferson Medical College in 1987, completed a radiology residency at the University of Texas Health Science Center in Houston, and a fellowship in abdominal imaging at the University of North Carolina, Chapel Hill. She met her husband, Dr. Christopher Willms, at UNC where he was finishing his general surgery residency. They married in 1994 and moved to Albuquerque for Chris residency in cardiothoracic surgery at the University of New Mexico before returning to North Carolina. Twin daughters Nina and Olivia were born in New Bern in 1998.

After ten years in academic and private practice radiology, Ann experienced a spiritual awakening that eventually led her to discern a call to ordained ministry. Affirmed by her church family at Christ Church, New Bern, and the Bishop of East Carolina, Ann and her family moved to Charlottesville in 2006 for her to undertake studies at Virginia Theological Seminary in Alexandria. As a seminarian, her training included field education at St. Pauls, Ivy and clinical pastoral education at the University of Virginia Health System. She graduated cum laude with a Master in Divinity degree in 2009, and was ordained to the priesthood on January 9, 2010 at Trinity, Fredericksburg.

Ann has served as associate rector at St. Pauls Memorial Church, Charlottesville; Carpenters Kids mission chaplain in Tanzania with St. Pauls, Ivy; supply priest at St. John-the-Baptist, Ivy; and vicar pro tem at McIlhany Parish, Charlottesville. Her medical background informs her perspective as a priest, as both vocations affirm the sanctity of the body, the hope of healing, and the importance of relationship to the wellbeing of individuals and communities. She enjoys writing creative nonfiction, getting a good workout, and spending time with her family.